I have been trying hard to understand how to use articles correctly. I read several English grammar books but they mostly provide only 5-6 rules for article usage. However, when I try to understand why an author used a, the or no article in a text, I have no idea where to look for it.

I am aware that it is very difficult to define specific rules of all article uses, but millions of English learners have the same problem every year. One can find here and there different rules for articles, but I am wondering why should not we create the most comprehensive guide here for article usage, which the large community can contribute to and millions of people can use it as the best guide for articles.

When talking about articles, we'll inevitably be talking about noun and noun phrases (and by extension countability, definiteness, identifiability etc.). Therefore, I believe the best place to start is the basic structure and the semantics of the noun phrase (NP).

An NP in general comprises a head noun and followed or preceded by modifiers. Usually there's only one head, which is virtually always a noun. The modifiers can be adjectives, relative clauses, or prepositional phrases. An NP usually has a determiner, which always precedes rather than follows the head noun. The tree diagram below shows the basic structure of an NP. This is from Huddeston & Pullum (2005), which has its own way of labeling each node. Every node is labelled with both function and category: function:category. 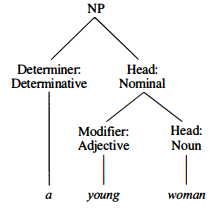 An NP has a special slot for determiners, which have their own structure and ordering. In some grammars (eg. that of Quirk et al., 1985), determiners may be divided into three categories, namely, pre-determiners, central determiners, and post-determiners. The figure bellow shows the basic structure of the determiners:

Articles fall within the central category. Central determiners are mutually exclusive; therefore, *the an apple is ungrammatical.

THE SEMANTICS OF NP

Semantic classification of noun is important because it can determine the countability of the noun. For example, STATE nouns seldom have a plural form and therefore do not normally occur with the articles ‘a’ or ‘an’, eg. *a jealousy.

The definite article The basically pre-empts the ‘which’ question. It indicates that the head of the NP is considered sufficient in the context to identify the referent. Look at these sentences from Huddleston & Pullum (2005),

i [The President of France] has appointed a new prime minister.
ii Where did you put [the key]?

In [i], there can only be one person to become President of France at a given time. Therefore, it uniquely identifies that person. In [ii], there can be any number of keys that might exist, but the article The is used because it is clear which key is referred to (eg. The car to the key you just told me to unload).

Highly scored questions about article usage that have topics we might want to cover:

8
Memorandum of Formatting
80
Resources for learning English
13
Why is "non-native speakers" part of the by-line for ELL?
18
Minor recurring formatting errors (and how to avoid them)
2
Are Parts of Speech / Syntactic Grammar most on topic here? (vs on other SE sites)
5
Answering: correctness vs. practicality
9
Do we focus more on building a database of answers, or helping individual learners?
23
Contributor's Guide to English Language Learners
2
How to find books to read at a certain learning level?