Should posts containing abbreviations be edited?

I have come across many posts lately containing abbreviations such as sth, sb/sbd, pls, ur, etc. At first I had no idea what these abbreviations meant (except for pls). I even posted a comment on the question asking about the same. But it was over a day, and no one had responded. Today I discovered another such post containing such abbreviations. A reputed user even pointed out that these are not correct English and should be avoided. I know he/she is a beginner, but should we take it on ourselves to correct them instantly? I even searched using these keywords, and got many results (most of them) which were left unedited.

On top of that, there are people who take their precious time in writing and linking their abbreviations in their posts, but can't write it in the context. I mean how very painful!

Hence my question, should we take a step and edit such posts, because like me there are many users out there who are not familiar with the messaging language that people use nowadays? I mean we are an English platform after all, we should encourage proper English habits and usage, rather than discouraging it.

This may appear verbose. Read only if you want to know what I think of the suggested posts/links.

Edited Part: Clarification of "why my question is different from the one's mentioned in the comments?"., although no one deemed of my question being a duplicate. I just want to clarify the observations. Thank you all for your references and suggestions.

It's generally considered poor etiquette to play the staunch editor who "fixes" every post with nothing but minor pedantic changes. But if you can improve the post substantively, you should; it can only help the site.

So according to him, we shouldn't edit minor changes! But then again, I do not understand, why are we hesitating to edit when SE itself defines the ground level rules for editing posts. Take a look at the following picture to know what I am talking about: 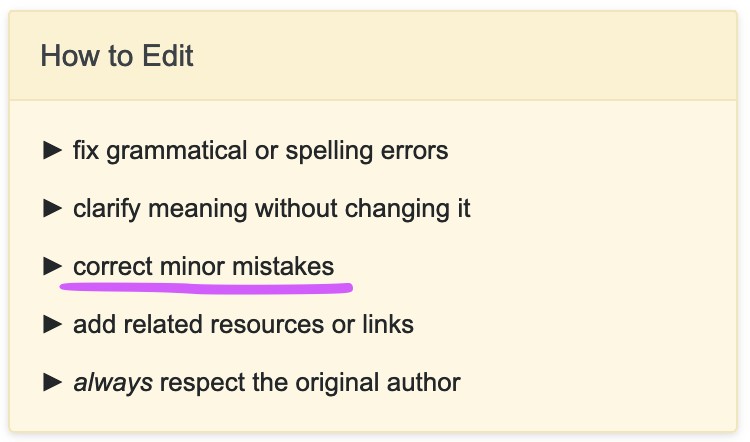 I mean it is clearly stated here what should be done while someone is editing. Then why so much confusion and hesitation?

Moving on to the last suggested post/link, We need to be more careful with suggested edits from low-rep users. I will include two lines which particularly caught my attention.

"Substantial" is not really a good litmus, because more often than not it could be subjective. A contribution in the right direction is a contribution, regardless of its character count.

As pointed out here by Eddie Kal, we shouldn't discourage newcomers by simply rejecting their (correct) suggested edits, albeit they being minor. Because again, we are an English community. I know some people may disagree and disregard this post, but it should be our top-most priority to help people out with their English knowledge with whatever we can and keep this site as clean as possible.

Hence my question still stands, because looking at all the answers above by different people on different questions, I am still pretty confused, although I think we should edit them. The reason being, if the questioner is actually using the word like sth or sbd or any other abbreviations, then they must surely know what the abbreviations stand for! Then it does not actually affect a responder/answerer to think that the fluency of the questioner is high, at the same time maintaining a clean etiquette.

Yes, please. One of the reasons to edit posts is to

clarify meaning without changing it

Like you, many users are not aware of the meaning of these abbreviations. They can be useful in text messages and tweets, which have a low character limit; on Stack Exchange, the limit is 30,000 characters, so there's no reason at all not to fully write out those abbreviations. 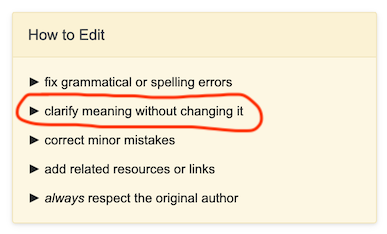 See also various discussions on Meta Stack Exchange, e.g. Texting abbreviations in answers and questions. Though I agree that as the English Language Learners community we should encourage proper English even more than other Stack Exchange sites.

Another approach is to leave a comment explaining to the OP that the abbreviation needs spelling out and ask them to edit it. This is particularly helpful if the abbreviation is ambiguous which they may not realise. This also seems helpful if they have mis--used a word as then they can see why they need to edit the question rather than finding out from an edit by another hand. I know that the edit process asks for an explanation of the edit but will new users know where to look for it?

Not the answer you're looking for? Browse other questions tagged discussion editing .

24
How much editing is too much editing?
16
Is it really pointless to edit questions to use correct English on ELL?
8
What's our editing policy?
8
When should I correct an ELL's grammar?
8
We need to be more careful with suggested edits from low-rep users
6
When should a question be edited in these situations?
-5
Informality, modern messaging, and editing

5
Using symbols without explanation
2
Minor edits on posts - should we accept them?
14
Mod-Edited comments?
16
Is it really pointless to edit questions to use correct English on ELL?
8
We need to be more careful with suggested edits from low-rep users
6
When should a question be edited in these situations?
2
Community edits should be made visible
5
Should questions be edited out of answers?