The question is simple: Given that English speakers often google things, is it reasonable to say something like "I Java"?

Apparently my answer to this is controversial, but most of the objections to it seem to me to be (for reasons I'll get into in a moment) untenable. If you read what I wrote, you'll see that I tried to carefully frame this use as the common practice of verbing nouns, something that native speakers do all the time. 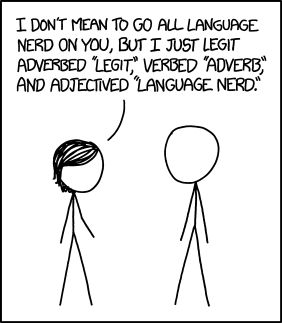 I reasonably explain this is colloquial English -- meaning that it is, in a sense, incorrect -- but nevertheless, English learners are likely to hear this kind of wordplay, and should learn to recognize it. Moreover, they can try it themselves, if they feel familiar enough with English to recognize the nuance.

Still, many detractors commented along the lines of, "They can't handle the truth!"

The main problem I have with this statement, is that it stems from the odd and ethnocentric assumption that such things as colloquialism, satire, wit, nuance, understatement, multiple meaning, and all the various other forms of wordplay are somehow exclusive to English -- as if the objectors would, in all seriousness, pedantically admonish a native French speaker against trying to make a double-entendre.

Yeah, about that. You do know French has those things too, don't you?

I can't help but consider this attitude to be narrow-minded and condescending. It seems far more considerate to assume English learners are familiar with the various kinds of wordplay, because such things exist in their own native language (albeit in different forms). As long as we can tell them, "This is a colloquialism of such-and-such type, and here is the context in which you might hear it," then we have done our due diligence. More importantly, it approaches the ELL user base from a position of respect. Adult learners should be able to understand that any non-standard use of language requires caution.

To put it another way: Imagine yourself learning your second/third/fourth/etc. language. You are told that, yes, you might hear some particular phrase, but that it's essentially nonsense that doesn't work outside of a very limited context. Wouldn't you appreciate knowing the complete answer, rather than simply being told, "Don't use it, period!" Aren't you perceptive enough not to use it indiscriminately? And if you believe yourself to be capable of such discretion, shouldn't you grant the same courtesy to English learners?

Look, I get it. We're here to help English learners, which means we shouldn't indifferently teach them "bad" English, and we may be reluctant to metaphorically give them so much rope they hang themselves. But at the same time, we have to remember ELL users are already fluent in at least one other language. They're not naive children. They don't need constant hand-holding. That's not "why they're here".

They just want the tools to say what they already know how to say, but in the most natural and idiomatic way possible in English. Isn't it plain good manners to give them the tools, even if we know those tools may be awkward and difficult to use properly, rather than tell them they can't be trusted because they might hurt themselves?

There are two sides to every coin, and the question you point to provides a great example.

One could look at that question in one of two ways:

I would answer the first question much like you did: Yes, we occasionally verbify nouns, even ones that don't normally get verbified.

I would answer the second question much like others tried to clarify in comments below your answer: The particular phrase "I Java" sounds very awkward and probably should be avoided, even in casual speech.

(I'm glad a third point was raised in a different answer, one that would also be helpful and useful for learners: If you're talking about the language, "I program in Java", is better than "I do Java".)

Anyhow, it's a complicated question with no easy answer.

That all said, I agree with your meta opinion: It's better to err on the side of license. I usually avoid telling learners that something can never be done, because sooner or later they'll encounter a counterexample1 somewhere – maybe even by a competent or established writer – and then our credibility takes a hit.

I'm not particularly fond of this dissenting comment below your answer:

I don't think this answer could be any more confusing to a person who's learning English. No, you shouldn't say "I Java". It doesn't make sense in any context. Let's leave it at that.

That was well-intended, I think, but it also could come across as condescending.

I agree with you: give them the tools.

Some folks want “rules” so that they won’t be in danger of saying something that’s incorrect. It’s understandable, because poor English (or even the perception of poor English) can impact their work or education opportunities. Other folks are more adventurous and are interested in slang and idiom. This is why we need multiple answers written from different perspectives for most questions.

Your answer has a score of 21 and is the highest scored answer the last time I looked. That’s far from a rejection of the idea that learners can handle the tricky parts of English like verbifying nouns. On the contrary, "(Noun) the sh*t out of this" — What nouns work? was very well received.

I believe that both answers written from the perspective of keeping things simple to prevent confusion and answers delving into more colloquial usage even though it may be challenging are valuable. We have many levels of fluency in our community and learners get more fluent as time goes on. It would be a shame if we excluded less fluent learners or if more fluent learners outgrew us.

The advice you'd give a beginner, an intermediate user, and an expert would be different. When I was trying to learn Irish one of my frustrations was that no-one would give me beginner explanations, only expert explanations that were so complicated that I ended up more confused than when I asked my question.

It is often necessary to have a good grasp of the basics before "breaking" the "rules". Beginners don't have enough experience to be adventurous without drawing attention to themselves. I will accept "bad" grammar from a native speaker with humorous intent, while rejecting exactly the same sentence from an English learner, even if they're deliberately being funny. Is that a double standard? Maybe. But I still think it's good advice. Don't break the rules before you've learnt them well!

The answer I'd appreciate when learning another language is: although it's possible to X, it's better not to at your level, and use word/construction Y instead.

I've wondered about something closely related: is it patronizing to explain a type of figure of speech, or even the idea of figurative speech as such, rather than just provide the cultural references needed to follow a particular instance of figurative speech? After all, doesn't every language have figurative speech—even pretty much the same set of figures? The following considerations have led me to think that when figurativeness seems to be an obstacle to a learner, we shouldn't shy away from explaining it. These are mostly just educated guesses, though. I'd love to hear more information.

So, my current thinking is that it's reasonable to assume that ESL learners understand colloquialism and wordplay—but often that's not enough. For some, at least, I think explaining concepts of figurative speech that are common to all languages provides a crucial missing piece of the puzzle of English, enabling them to put the rest together.

The above does not include learners' inevitable search for unshakable rules to make learning easier. If the concepts of figurative speech were more commonly understood, though, it might be easier to guide people to focus more on examples than on rules.

I think you've just misunderstood the issue the commenters are bringing forth. They aren't arguing that ESL speakers can't understand the concept of colloquialism. They're arguing that your answer is confusing. Rather than being straight to the point, you meander a lot, and your conclusion isn't even clear.

The Question asks whether or not "I Java" is a commonly used phrase in the same way "I googled" is. (The answer is "No.") They do not ask whether they can use it in a humorous fashion. They cite "I googled", which is standard English (even appearing in Merriam-Webster without a "informal" tag).

While what you say in your Answer is interesting information, the reader must infer what the direct answer actually is. This would be even more difficult if you were an English learner--especially if your English was at the level of the Asker.

Your answer would be much better if you simply said "No. While "google" has become a verb in English, Java has not." After that, if you wanted to get into verbing nouns and how it is done humorously at first but eventually can become part of the language proper, then that would be fine.

As it currently stands, hover, I think Michael gave the best Answer to the question actually asked by the Asker. His response is direct and to the point, and fits the level of English indicated by the Asker. It does not get caught up in side issues.

(That said, Ghedipunk's Answer is also good. It answers the Question in the second paragraph, and uses "verbing" to discuss the underlying concept quite well. And it avoids implying that verbing is only used as a form of wordplay and humor.)

17
What should we do with questions that ask about obsolete English?
4
How are questions about the equivalent of an expression used in another language perceived?
4
Should headlines be considered off-topic?
17
"It's grammatical but..." - how should a non-native speaker take this?
4
I name a product with an English word, and many people say it's a bad name. Can I ask why it's bad here?
10
What's the policy on using profanity in answers (where appropriate)?
3
Let's use plain language (this time for real)