Why does not everyone accept an answer?

I'm fairly new to StackExchange and this is the first community I've participated heavily in. One thing I can't figure out is why more people don't mark their questions as answered when a thorough answer has been provided. It seems like doing this would prevent those items that keep being bumped by community, that already have a good answer, but clutter the site. Is there any particular reason why people don't mark their questions as answered?

Community members who ask questions and then do not accept an answer are a very, very frequent topic of conversation (i.e. complaints) across all Stacks, going back a long time, with solutions proposed from nudging via comments to auto-accepting answers. Some of the greatest hits at MSE include these:

It's right up there with requiring comments for downvotes, and like that proposal, requiring or defaulting to an acceptance is a non-starter. There are any number of reasons why a community member may not accept an answer, for example

Quite a large proportion of new users on the SE network are gimme da codez questioners or answerers. They aren't interested in joining a learning/teaching community, they're satisfied just seeing their unreferenced one-line submission published. In the ideal, they see what SE has to offer, learn the rules and the culture, and take it seriously, but that will never be the universal reaction.

Even among those who do stick around, not everyone even realizes that questions should or even can be accepted. Unless you've read through every last bit of the help center, which few of us have even as experienced members, it's entirely possible not to comprehend that the questioner must intervene before the green check is awarded. The UI of some sites, moreover, especially on mobile, may not make the distinction between questions with and without accepted answers clear.

It's one thing to find a working answer on one of the technical Stacks: you plug in the code snippet, or replace the faulty part, or change the order in your procedure, and you have immediate confirmation whether an answer works or doesn't work. On the "soft" Stacks, it's much harder to know what answer to choose; how does a learner or novice decide which anonymous "expert" on the Internet has in fact provided the most helpful answer about, say, LDS interpretation of the Apostles' Creed, or how much institutional prestige affects an academic career, or why Hitler invaded the USSR.

It's perhaps especially difficult with language learning because "everyone's an expert" — by some definitions this is literally true of native speakers (though they may not be able to articulate why something is correct or incorrect, only to intuit it), and the nature of English means that expert speakers will contradict one another. Given the practical focus of this site on learning, appeals to authority (even magisterial ones like CGEL) are not always the best solution, and of course, every authority has its detractors.

Consider further that very often, a question reveals flaws in some teacher's exam question, or lesson, or even curriculum choice (e.g. assigning Strunk & White as a textbook without adequate context). I wouldn't be surprised if some cannot bring themselves to accept an answer from some anonymous handle on the Internet which contradicts what they have been learning in school, or at their expensive English lessons.

Following on from #2, it's entirely possible that the asker is holding out for the One True Answer which resolves any inconsistencies in answers already given, or meets some other unmentioned standard for authority and comprehensiveness. Or, adequate answers may have been given, but not expressed in a manner that the asker can fully comprehend at his or her level of English. Thus, the asker holds out to see if something better is in the works.

And, much as we hate to admit it, we don't always provide adequate answers. Not every question is "interesting" to knowledgeable and skilled answerers, and such members do not see every question that is. So, not every question has an answer that an "expert" observer would find acceptable, in multiple senses of that word.

In holding out for better answers, one may pass the checkpoints for any reminders about selecting answers. I've had more than once acceptance come more than a year after I originally posted an answer (at Travel.SE and at EL&U, not here that I can recall).

Consider that someone in need of an answer "right away" will probably have asked the question of multiple resources, both online and in real-life. As with #1, any of these hit-and-run questioners, having received an answer, is not going to come back to bask in the responses from any of the half-dozen places where they asked in the first place.

Alternatively, sometimes we ask out of curiosity, but no matter how exercised we are by that curiosity in the moment, we lose it later on. This phenomenon always reminds me of the setup for a classic episode of The Simpsons, "Bart vs. Australia." 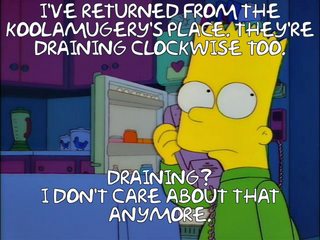 Not the answer you're looking for? Browse other questions tagged discussion support accepted-answer .