Recently, and by recently, I mean during the past month or so, we've had an emerging pattern of voting to close questions because they lacked research.

More precisely, questions used to be closed with this reason only for lacking context:

This question should include more details than have been provided here. Please edit to add the research you have done in your efforts to answer the question, or provide more context. See: Details, Please.

Recently, the emboldened add your research has gained more prominence, to the degree of becoming a standalone close reason. To be clear, I've seen instances of questions closed with this reason that had nothing to do with context, or a lack of context.

I do not approve of lacking research being enough reason to close a question, because firstly, it's a slippery slope, and makes closing a burdensome task, when you just see a borderline answerable question and you close it because why not; and second, because real life doesn't work in a way that would make prior research a prerequisite to asking a great question.

Great questions asked by people who didn't see fit to provide noisy Google results for things they obviously know would take the greatest hit. Don't get me wrong — I endorse detailed effort, but only when the question benefits from it. And when containing effort becomes policy, naturally questions that don't benefit from effort, questions where effort would be fluff, would either have to be closed or noisy.

As for the question, should we be concerned about research-only close votes, or should we continue closing questions this way, because not much is lost in your opinion?

I didn't want to invoke the meta effect, but the comments and the votes made it mandatory for me to provide examples for this discussion to continue. Please don't alter the fate of the examples below (don't vote to reopen or close, or don't up- or downvote if you land on the question from this meta post)

This question obviously doesn't need further context in order to be answered. Sure, I don't like it the way it's phrased and it would've been closed if we had a homework policy, but the "add context" close reason is being used as an "add research" one.

By contrast, this is a question I answered, which in principle, has nothing different from example #1. It demonstrates something that's seemingly contradictory, and hence interesting, but still, there's no sign of effort.

Again, no research demonstrated, but certainly enough context was provided, so doesn't make much sense to close it as a reason primarily used for lack of context in the past.

The "Please edit to add the research you have done" part of that close reason is easy to abuse, but it does have a purpose. I think that the "lack of research" attitude could be the start of a problem, so I'm glad you brought it up. However, we should not absolve authors of responsibility for the fate of their questions. If someone ignores guidance from the community, it's not entirely the fault of the close voters when the question doesn't get answered.

We shouldn't ask for research because we want someone to prove that they have made an effort before we will deign to answer their question. The primary reason we need to know what someone has found when they tried to answer the question is so that we can write a good answer. The research the author did shows how they're thinking about the question and what they already know. Another reason is to make it easier for the next person with the same question to find an answer here on ELL if they use a similar research tactic. If the question on ELL contains the search terms that didn't help the author, the next time someone uses those search terms, a helpful answer from ELL might show up in their results.

If the entire question is "What does this mean?" as in example 3, it's difficult to answer well because we don't know where the problem is. The "context" we're asking for is not just the words around the phrase being asked about. Context is also the answer to "Which part is confusing and what do you already know?". It can be difficult for fluent speakers to see the issue with language that seems quite natural and obvious to us. It's like the classic duck/hare optical illusion: 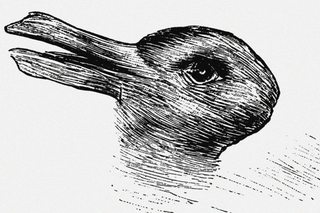 Fluent English speakers might be predisposed to see the "rabbit" in a sentence and non-native speakers might see the "duck". If the question is "what is the mouth in this picture called?", the answers are not going to be very helpful unless we know the person asking the question is seeing a duck. It might also help to know whether they are aware that the picture could also be a rabbit.

Why do we close questions? That's what we need to agree on. In my opinion, we should close questions only when we want to prevent answers to them. We might want a temporary block on answers because the question may change significantly when we edit/clarify it. It might be a permanent block because we want to direct all answers to a similar "duplicate" question so that they can be grouped and ranked. We might want to prevent users from wasting their effort on a question that is completely off-topic for the site. We might want to prevent extremely low quality answers, like copy-and-pasted definitions from a dictionary. If you can't come up with a good reason why someone should be prevented from answering a question, then you should probably just down-vote the question instead of close-vote it.

There will always be some disagreement on whether individual questions should be closed. Also, since almost all of the community is human as far as I know, mistakes will be made. Luckily, it's easy to reopen a question.

Not the answer you're looking for? Browse other questions tagged discussion close-reasons scope .

9
Policy for Research Effort in Questions, and its Strictness
8
How to handle questions if answers can be found in a grammar book as "basic" knowledge
4
Are 'research/detail' close votes being used too liberally?

9
Policy for Research Effort in Questions, and its Strictness
13
Policy on homework questions
2
Replacing the "Off-topic because this question needs more details" close reason
14
Why are there so many apparently erroneous proofreading close votes?
12
Explain to me why you are throwing your close votes at this question
4
Are 'research/detail' close votes being used too liberally?
1
What to do with old questions without context?