This is not the first time that I witnessed comments are unduly deleted by moderators on ELL.

I expressed my opinion on why the third link in @NathanTuggy's post should be closed and I don't understand why the comments must have been deleted. I think it is nothing but abuse of power and there is no clause in Who are the diamond moderators, and what is their role? or A Theory of Moderation that justifies the deletion of the comments made by myself and @NathanTuggy.

@NathanTuggy also states in the ELL chat room that he can't understand why they were deleted as indicated in the image below.

My comments to @NathanTuggy's question, If there's only two or three possible contexts for a question, don't vote to close it as unclear, too broad, or Details Please. 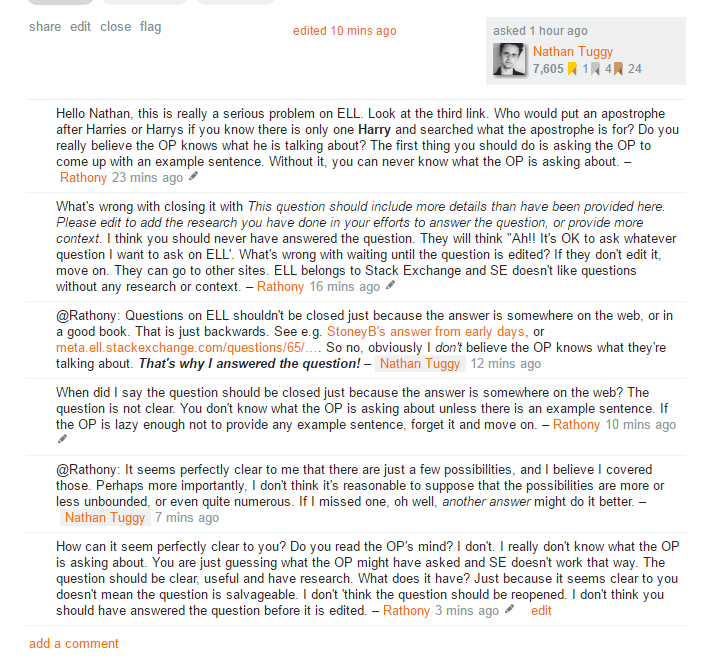 Moderators on graduated sites are elected to the position. We don't remove moderators except for:

Deleting a handful of meta comments might be a low level abuse of power (at least potentially), but not something we'd remove a mod for. Demanding that is jumping ahead a few steps. Instead, I'd suggest having a calm discussion about the usefulness (or lack thereof) of these comments.

If it were me, I'd probably have left your comments. But the are a bit distracting from the main thrust of the question, so I don't fault the moderator for making that call. Certainly, I don't see any abuse of power here; the moderator who deleted the comments is not the same as the one who answered the meta question.

I think the "constructiveness" of that last comment in particular is tenuous at best. I see rather hostile accusations about "reading the OP's mind" along with allegations that one of our most respected members effectively "doesn't understand the way SE works." Moreover, calling an OP "lazy" is borderline rude. Even the rhetorical question in the initial comment ("Do you really believe the OP knows what he is talking about?") could be regarded as belittling.

I won't delve into details here, but I will say that the mod team discussed these comments privately and there was widespread agreement that, in this case, comment removal resulted in an overall improvement. The main concern was not whether or not Nathan might be offended by the comments, but how others in the community might perceive these comments, to include the so-called lazy OP who presumably "does not know what he is talking about." Coupled with the belligerent and authoritative tone of these comments, we felt it was better to simply remove them than to make a sidebar conversation go on even longer.

I think a better response to the comment deletion would have been to take a more balanced and objective look at the comments, rather than republish them here, and see if maybe they were perhaps not quite as polite and constructive as maybe they could have or should have been. I would suggest that a little more humble openness, and a little less belligerent insistence, could go a long way.

As for that "demand" of a resignation, I don't think any in the mod team plan on stepping down. Personally, I am rather saddened by that knee-jerk reaction. Since our recent election, I feel like the moderation team is stronger than it has ever been. I'd like to take this opportunity to laud the rest of the moderation team, and add that it's really a shame when such acrid comments are made toward a small team that is working so hard to keep things running smoothly.

I agree with others who have already provided answers, but I would like to suggest that Stack does seem to have evolved in a direction where moderation has almost become a greater barrier to enjoying the site than the alternative. Shouldn't we be having a broader discussion about loosening up the mod criteria?

13
So many answers in comments
-9
Why should moderators delete my comments leaving others' comments?
6
If there's only two or three possible contexts for a question, don't vote to close it as unclear, too broad, or Details Please

8
How to continue a conversation from the comments if we go off-topic
20
Unwelcome Criticism and Editorializing
1
How do we handle source attributions that do not conform to the new rules?
11
A proposed solution to the “grammar” dilemma — Please contribute your answers to the “what is grammar” post
1
Some curious deletions
1
Asking for clarification at “Transgender” versus the obsolete term “transgendered”
3
Can a moderator tell me why a user's account was deleted?