Should I add another answer which adds trivial notes to the existing answer?

Suppose to a question, only a single answer has been posted and the single answer lacks a trivial information, which can easily be brought into the attention of the answerer by a comment to his answer. So in that case, should I add another answer adding the trivial information? I am asking this question because in this way, Q/A ratio of this site can be improved which is a criteria For a site's success according to Area51. Also relevantly asking, should we down-vote if a duplicate answer is posted adding nothing more to the existing answer?

You could add another answer, or you could just add your information as a comment. Both are acceptable in my mind.

Other times, it's more of a judgment call, and I suppose it depends in part on how "trivial" the addition would be. (Sometimes an extra comment will have enough substance that it's hard to tell exactly how "trivial" the information really is.) But if such information really does add to the completeness of an answer, I think it ought to be added – one way or the other.

One practice I've seen from time to time is to preface such answers by calling out the original answerer by name; something like this:

I think Mistu4u covered this pretty well in his answer, but I would like to add one thing...

I suppose there's a third option, too: one could edit the information in. However, many users feel a little funny about editing someone else's answer to add content (as opposed to making a correction). I'd probably only do that in rare instances. That said, I've seen where someone left me a helpful comment, and then later encouraged me to edit it into my answer myself, saying:

Add that to your answer; I'll delete my comment.

It's nice to see such obliging civility on the network. That makes my day, actually.

I think it depends from which information you would add. If the information is relevant, and important for those users who read the question (and its answers) that cannot be buried under X comments, with the risk it goes unobserved, then it deserves to be an answer. IMO, the answer still needs to answer the question, even if partially.

In any case, I would not add an answer just to increase the average number of answers per question. Statistics about the site should not drive what we do; they are used to check how the site is going, but we should not be influenced from them.
Then, it is not said that not having the minimum number average answers per question would prevent ELL from graduating: The requirements are evaluated together, not singularly. See for example Drupal Answers statistics: The number of answers is 1.7, but the site graduated. 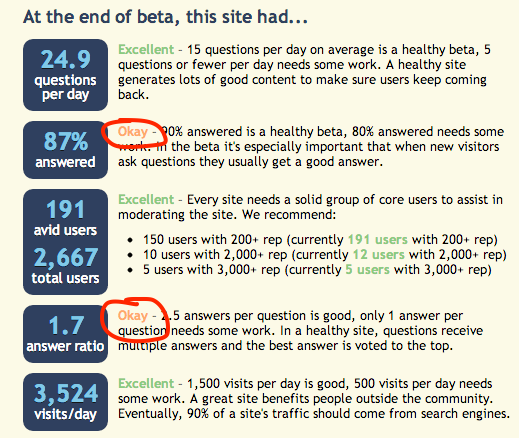 8
What's our editing policy?
9
Should we close questions that are exact duplicates of open ELU questions?
6
What should we do when a user asks about nonsensical English?
30
Submitting Answers that merely answer the question
2
Correct motivation for learner to ask a (possible) duplicate question?
2
How can an OP find similar questions and avoid posting a “duplicate” question?
16
“Fixing the grammar should be done in answers not the question”