As you can see the new design just went live. Congratulations! Thank you for your valuable design feedback.

We have also themed the twitter account and newsletter template for this site, and adjusted the privilege levels to higher thresholds.

If you see any CSS/styling bugs, please start a new post and tag it with "design" and "bug".

Congrats again and thank you for being an awesome community!

Oh! And by the way, we have also updated your Chat theme!

The icon on the tour page and the smaller icons have been updated, they will be live after our next production build.

Not really a bug report, just expressing my surprise.

I think it would be nice to get that E on the Tour page.

Also, it would be nice if that E were incorporated as the tiny symbol used in the SE pulldown (perhaps sans bookmark, if it's too hard to read it with a bookmark):

If we switched to the E, the logo would look like both an E, and a stack of dictionaries. As it stands now, when an ELL question appears in a list of Hot Questions, it really doesn't resemble much of anything: 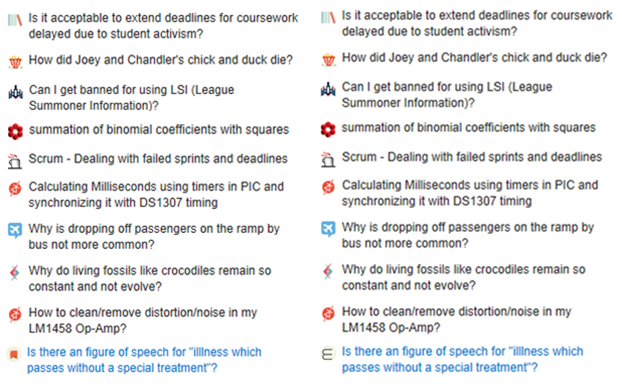 The shape on the left looks like a drop-cap E, so the word looks like the site is "Eenglish." I couldn't even figure out what the dictionaries were supposed to be until Wendikidd told me. I think it would be better to go with the drop-cap, but if not please add some page lines to make it clear the dictionaries are supposed to be books that resemble a letter, not an actual letter.

In the Select your next badge section, when the badges are in progress we can able to see the bronze and silver badges but the gold badge is not visible like the reaming badges due to the color transparency. Hope this need to be fix.

After the new UI Change for the profile page, this display issue has been fixed.

status-completed This should be fixed after the next production build, #bringbackoursidebar

The sidebar has decided it doesn't fit on the side, and has instead moved down below the posts. 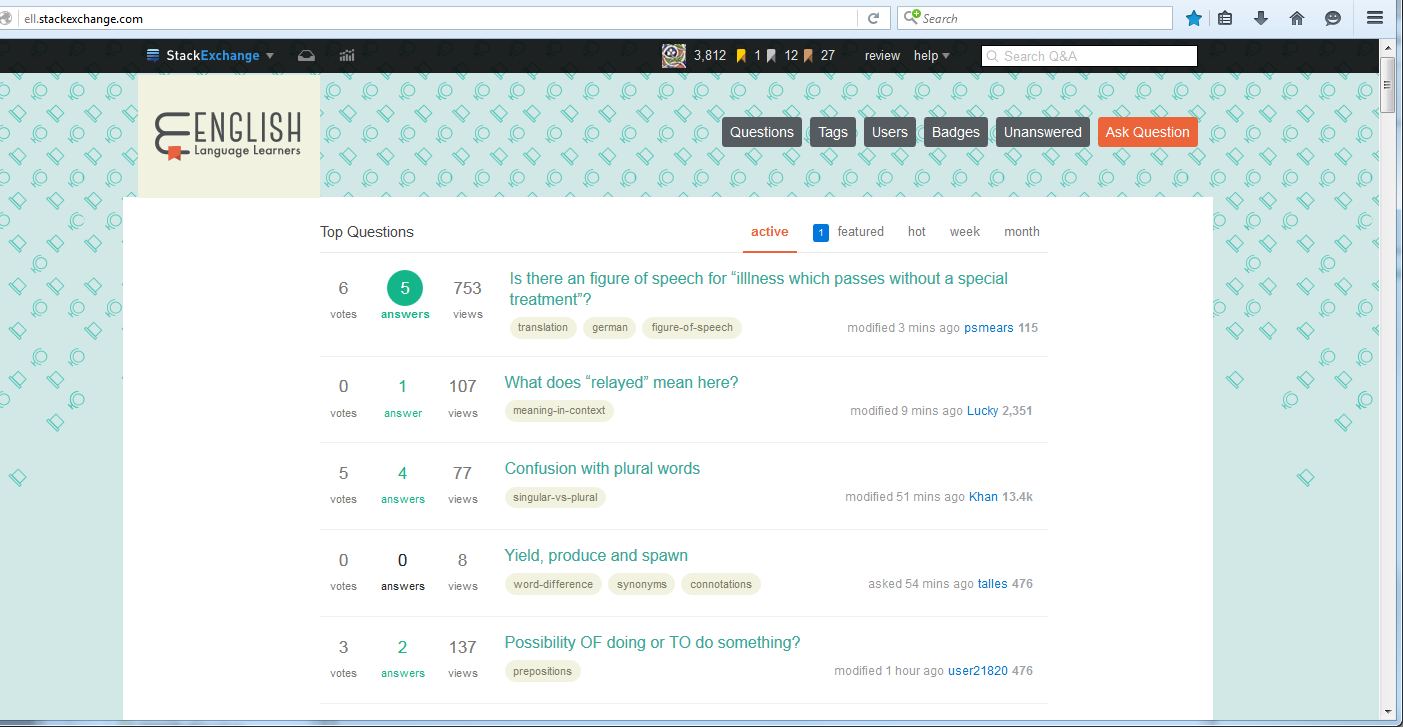 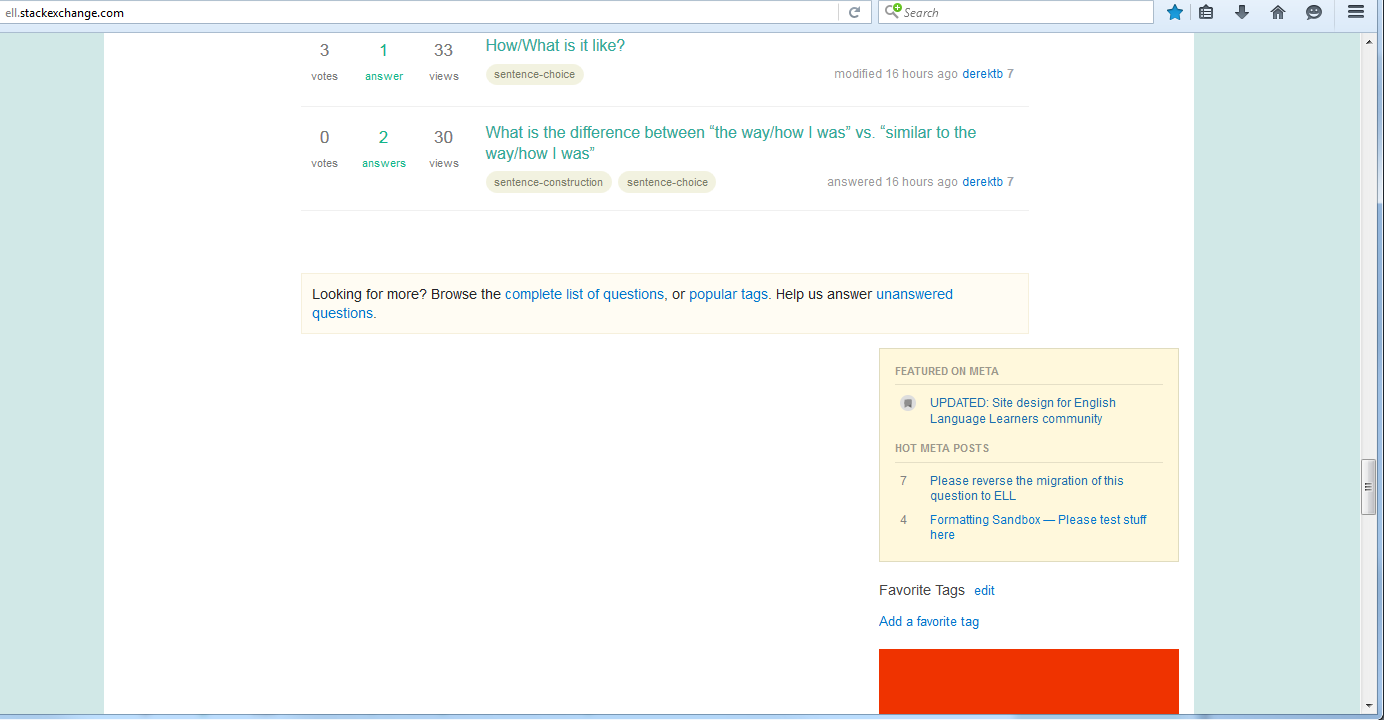 Chrome looks OK. IE11 is fine if I'm not logged in, but looks exactly like Firefox as soon as I log in. (It's possible Firefox also works if you're not logged in, but I ain't logging out to check.) And like Colleen said, this is only for the main pages - if you open a question, the sidebar is up where it's supposed to be.

The icons have been updated, they will be live after our next production build.

This design bug was posted as a separate question on meta; I wanted to place it here so that it would come to the design team's attention, as I agree wholeheartedly. (And thank you for being awesome; the design as a whole is incredible, and you have ELL's thanks!)

Link to design bug post: Bookmark in favicon is too small and the circle blends into backgrounds too easily

The overall gist of the post is that the tiny icon that appears for ELL when you click the left sidebar is much smaller than on other sites, and that the gray circle is very different than the style of other icons. OP requests either the orange bookmark only, without the circle, or the E dictionary with the orange bookmark (I support the second option, but the first would also be an improvement).

In the tradition of manuscripts and early typeset texts with large ornamental capitals, couldn't the ornamental E be made a part of the word, so that it served more than a decorative function? I find the EE a little disturbing.

I would also like to see the title of questions in a little darker hue. I find the current color too pale:

It's a strain to read after a while. Not enough contrast.

P.S. Sub-pixel font-rendering technology works poorly with low-saturation colors (pastels). A pale teal for a text font is a poor choice from the point of view of legibility. This complaint cannot be dismissed as merely a matter of personal taste. Just the opposite is true -- the current design gives the personal aesthetic of the designer primacy over legibility.

When I link to the site from chat, it shows the old beta-style header:

But as you can see, when I link to EL&U from chat, I get a snazzy EL&U custom design header.

Will we get snazzy chat links for ELL, too? :-)

I really like the site's design, but I'd like to know what the significance of the "E" and the bookmark is. I imagine the bookmark has something to do with learning, i.e. marking a page that is useful.

The new logo/icons are not yet updated in the Stack Exchange site, it still showing the old logo/icons. Those are need to be update.

Those icons were updated correctly in the Stack Exchange site.

Not the answer you're looking for? Browse other questions tagged discussion design .

37
UPDATED: Site design for English Language Learners community
10
More places for the E instead of bookmark
15
Bookmark in favicon is too small and the circle blends into backgrounds too easily