What comments should I flag on ELL?

This post is meant to gather a consensus on what comments mods and the community consider to be flaggable.

When I want to flag a comment, I see this: 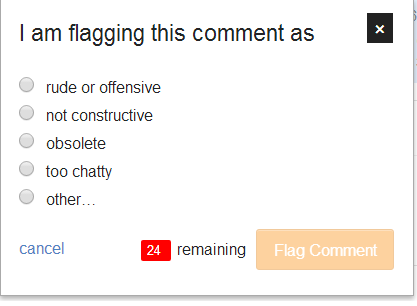 But what do each of the reasons mean, and when should I choose them?

1. We (the people who care about moderation and occasionally flag comments) get declined flags every now and then and that's because mods aren't consistent with their decisions unfortunately. (Naturally, since lack of consensus results in lack of consistency, they're not at fault at all)
2. While the reasons for flagging are obvious, different SE sites have different rules for how to flag and how to handle flags. Different SE sites have different moderation cultures since they handle different topics.
3. It just feels nice to write a FAQ and do moderate comments. Sometimes they get out of hand!

How a flag gets ultimately handled is not a matter of inconsistent decision-making; it's more a matter of each flag being its own case, and it must be weighed individually, by individuals.

Some flags (such as blatant spam) are easy no-brainers. Many of them, though, get thrown along the gray areas. And we have limited options on how they are ultimately handled.

If a flag ultimately gets declined, that's not intended to be punitive. I appreciated most flags I get, even the ones that get marked as declined instead of helpful.

My daughters used to marvel at how many of their questions would get answered with "it depends." And that's how I feel about most of your flagging questions:

Should I flag a comment that contains misinformation? If so, as what?

Rather than answer that as a yes or no question, I would rather talk about the many ways you could handle that. You could politely and constructively make a comment. You could do more research to see if maybe the comment is right, and your perceptions are wrong. You could flag it to bring it to the moderation team's attention. I don't think any of those responses would be wrong, but I think that, in most cases, flagging is probably the least constructive way to handle it out of the options I've listed.

Should I flag old close reasons? If so, as what? e.g. "this is proofreading question and is likely to get closed unless you provide a source of concern"

You could, but, again, I think it might be better to cast your close vote and let the rest of the community decide.

Should I flag comments to which the edit of the post has responded? If so, as what?

If you think those comments could now be deleted, flag them as obsolete. Sometimes, though, I'll let them stand, if I think they will help bring attention to the edit history which may provide important context, such as when an older answer might have focused on the original question.

Same thing as above. Flag them as obsolete if you think the site would be improved if these comments were cleaned up.

Should I flag comments that can reasonably stand as answers? If so, as what?

Most of the time, no. Either leave a comment, saying, "Maybe you could expand that into an answer," or write an answer that has more substance than the comment, and acknowledge that first person's comment in your answer. Then there's another possibility: maybe the comment is fine, but the question is too basic. Some questions invite "comment answers," like, "Which one of these three is grammatically correct?" (Answer: "The second one.")

Should I flag comments that criticize the post rather than the person, even if they do it harshly? Comments ranging from "this is bad answer" to "what the hell is written here! etc."

Flags to rude comments are always appreciated. Everyone should strive to play nice.

That all said, those are just my opinions, and gray areas abound. When is "misinformation" really "misinformation?" When is a comment witty instead of rude? When is a comment obsolete versus when does it hint at some important revisions? When could a comment really be an answer on its own, versus being a helpful comment? Participate long enough, and you'll run into plenty of cases where you find yourself thinking, "Hmmm, this is kind of in-between."

Should I flag a comment that contains misinformation? If so, as what?

No flag is required. If it contains wrong information, write down a comment down to it. Say - "I think it's not correct. 'read' is a transitive verb and it'd require a direct object."

Should I flag old close reasons? If so, as what? e.g. "this is proofreading question and is likely to get closed unless you provide a source of concern"

Yes, you should flag it. It's obsolete and after editing the question, this is no longer informative or relevant to the post.

Should I flag comments to which the edit of the post has responded? If so, as what? Imagine a scenario when someone posts an answer and someone else comments "It would also be nice if you mention that blah blah blah" and the poster edits the question mentioning blah blah blah".

Yes, flag it. It's now obsolete for the same reason mentioned above. The 'blah...blah...blah..' is now included.

Another scenario would be that someone posted a comment that "this answer is wrong because X is not Y" and the poster corrects their answer.

Should I flag comments that can reasonably stand as answers? If so, as what?

We often do that. No need to 'flag'. Flags are visible to moderators and we cannot urge the comment writer. In fact what we have been doing is quite right! Express your opinion to the commentator that it should better go as an answer. In fact, this is very useful as in some cases, the commentator replies back that s/he is quite busy and cannot post that as an answer. Some other user who posts the answer gets very good information looking at that comment. So, let it be!

Should I flag comments that criticize the post rather than the person, even if they do it harshly? Comments ranging from "this is bad answer" to "what the hell is written here! This answer is [ . . . ]."

Criticism is welcomed, rudeness is not! So, if you want this site to be clean, flag comments that don't have any flair of a civilized tone.

Thanks for the invitation, by the way!

As far as I can tell, there is no point to flagging comments as "obsolete". The moderators will just decline the flags.

Not the answer you're looking for? Browse other questions tagged discussion support comments flagging .

13
Mod-Edited comments?
3
Is it wise or just sugar-coating to remove the comments?
2
What's the proper way to flag the entire comments section of an answer?
17
Lesser of evils on ELL: comment vs. LQ answer
4
Flagging thank-you notes
1
Asking for clarification at “Transgender” versus the obsolete term “transgendered”
13
Comments are constantly disappearing
0
Criticism should be constructive, not destructive