Will examples of an idiom in actual use help me understand it?

Not being a native English speaker, sometimes, while reading a book, I find it hard to grasp the meaning of certain phrases: "to push to the limit", "as bad as it gets", "all hell breaks loose" - to name a few. The problem is that such phrases aren't translated the way they should by any translator software(like Google Translate) that I know of.

When I encounter such a phrase, I think, I might gain a better understanding of what this phrase is about if I were shown how given phrase can be used in other sentences.

So, the question is: "Do you think that such examples will help?".

Given that the Google Translate wouldn't help under these circumstances, the only option I am left with is to google the phrase. But it'll probably take up to several minutes to find real world phrase usages by googling. So, I'm pondering on creating software program, which will perform a search of the phrase I'm interested in over a library of books and some other online text repositories in just one browser window. Hence, I'd like to know, if I'm the only one annoyed by this problem. Or maybe you found some other way around this issue?

I think a large number of examples is a very good way to learn how idioms are used; and I am happy to tell you that the software you want already exists in the online interfaces to several corpora.

A corpus (plural corpora) is a database of texts which have been 'tagged' and organized in various ways to make the database searchable for collocations and syntactic phenomena. Probably the best-known corpus is Google Books, which is very easy to search for specific collocations; you can use the 'search tools' to confine your search to a specific timeframe. Here's a sample, a little bit of a page of hits from a search on "all hell broke loose" in books published in the 20th century: 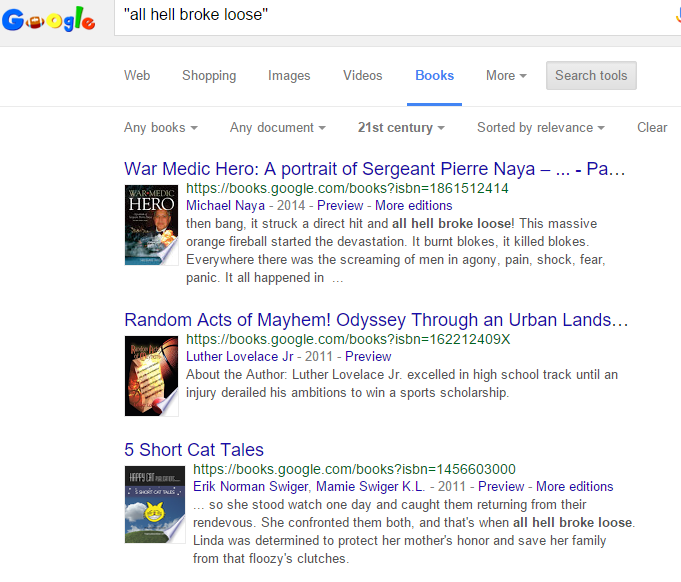 Google Books has only limited syntactic tagging; a much more useful resource is the collection of corpora at Brigham Young University. The texts there are tagged in depth and organized by source and genre, so you can perform an enormous variety of searches. For instance, here's a small piece of a search on "all hell [break] loose" in the Corpus of Contemporary American English (COCA); I put break in brackets to get not just break but breaks, breaking and broke as well.

The dictionary is your friend.

I'm not saying Googling the phrase won't help, but a more direct way to unlock the mystery of an idiom might be the dictionary.

I recommend starting at OneLook, which is a website that searches through several online dictionaries. As an example, when I enter all hell breaks loose into OneLook, it returns three or four potentially helpful dictionary links: 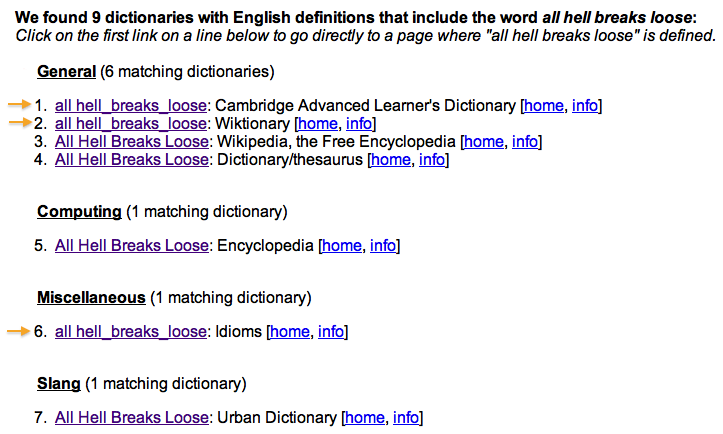 If you notice, links 3, 4, and 5 have the phrase in all caps. That's in part because All Hell Breaks Loose as been used as a title in various places, so we won't get much there. But links 1, 2, and 6 look promising.

In fact, all three of those provide decent definitions. Link 6 links to The Free Dictionary, which happens to be an excellent resource for deciphering idioms. It explains:

if all hell breaks loose, a situation suddenly becomes noisy and violent, usually with a lot of people arguing or fighting : This big guy walked up to the bar and hit Freddie and suddenly all hell broke loose.

The Cambridge Advanced Learner's Dictionary (Link 1) is written with the English Learner in mind. In this case, CALD and TFD give identical definitions, although the example sentence is different:

One ​policeman ​drew his ​gun and then ​suddenly all hell ​broke ​loose.

The meaning at Wiktionary (Link 2) differs some, but that's a good thing. Multiple definitions often help us get a fuller sense of the true meaning of a word or phrase. Wiktionary says:

The OneLook results also provide a link to the Urban Dictionary. A note of caution about that resource: it contains a lot of slang, and it is neither compiled nor reviewed by a panel of experts. Still, it might contain a lot of phrases not found in conventional dictionaries (some of them quite vulgar). It has its place, but should be taken with a grain of salt. In this case, I find its definition markedly inferior to the two others I've quoted, but it does give an indication about how the man on the street might define the idiom:

If you ever find yourself in that situation, though, ELL is a great place to get additional help. However, you'll find that your questions on ELL will be much more enthusiastically answered and upvoted if you include your research. In other words, there's a right way to ask, and a wrong way to ask. The wrong way simply asks what a phrase means; it includes no prior research, and provides no indication of the context where you've encountered the phrase.

Here is the WRONG way to ask:

What does ‘push the limit’ mean?

Sometimes I see the phrase push the limit, but I don't know what that means. Can anyone explain the meaning of that phrase?

That question doesn't indicate any prior research – it doesn't tell us where you found the phrase, what you already know, or where you looked for help.

Here is the RIGHT way to ask:

What does ‘push the limit’ mean?

Sometimes I see the phrase push the limit, but I don't know what that means. For example, in a review of a television show, I saw:

"Shameless" always knows how to push the limit and make 100 different things happen in one episode.

Can anyone explain the meaning of the phrase push the limit?

The context might be very important, because sometimes words or phrases can mean very different things in different contexts. (If Mary Elizabeth Braddon had written about a "gay marriage" in the late 1800's, for example, she might be referring to something quite different from what that phrase generally means today.) The prior research is quite helpful, too. By telling us you couldn't find the phrase in OutLook, I won't bother looking there. The community also won't resent how it feels like we are doing legwork that you should have done, and that will spare you from a comment saying as much – perhaps with an accompanying close vote or downvote.

However, ask your future questions as admirably you did asking this question, I'm sure you'll do fine. This was an excellent question, and I hope the answers you get here prove to be helpful.

I would say that yes, this will help. Idioms are usually passed down by word of mouth and they become something called internal cultural capital, which is a fancy word for what most young people would now describe as a "meme." Such capital is most often learned through what is colloquially known as "osmosis," or learning by exposure. In other words, you have to infer the meaning of the phrase by seeing it used in many different contexts. I suppose you could also make a question on this stack exchange for every idiom you come across -- but that would get tedious quickly!

It also helps a lot if you study movies or television that speak English, if you want to learn idioms. That way, it is far more likely that you will be able to discern the meaning of the idiom through visual cues that the show gives you, whereas in a literary piece all you have to go off of are the other words surrounding it (which you may or may not also have trouble understanding). Just make sure that, if you decide to use subtitles, they are translated correctly so as to preserve the original intent... that is a very common problem with watching foreign media, especially if the non-English language is not of a European origin.

8
Will ELL be attractive to those who don't already use Stack Exchange?
2
Whats the name of this website I need to find some statistics about the use of help to