DO NOT FEED THE BEARS

A question was just asked on ELL, and it needs a lot of work. 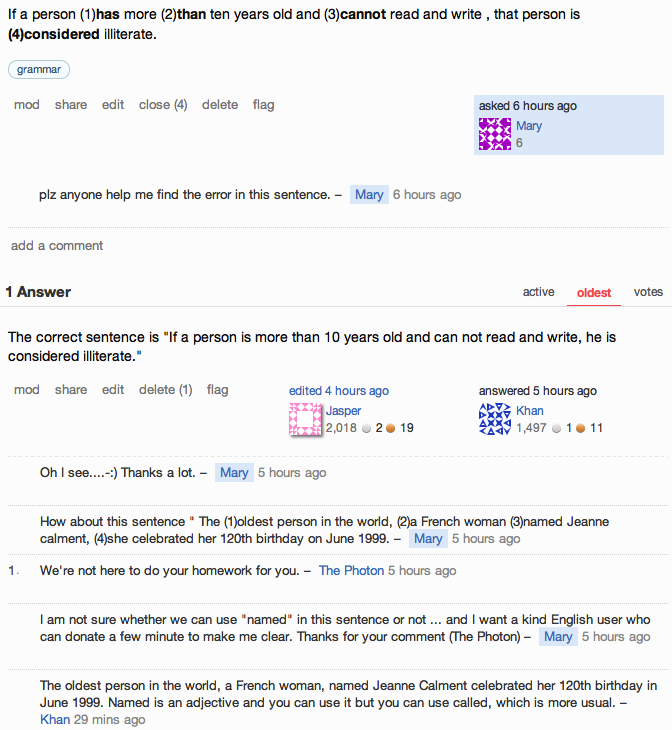 I'll start by addressing the question added in the comments under the answer.

Had ELL received a question that looked like this:

I found this exercise in a book with practice English problems:

The problem is designed to help us recognize errors in English. I think the answer might be (3), because I'm not sure we can use the word named in that way. Is my hunch correct?

I wouldn't have a problem with that question. The source of the quote is (somewhat) identified, as is the source of confusion. The O.P. has clearly put some thought into solving the problem, and a plea for help on ELL is justified.

As for the first question in its original format:

Error Identification
If a person (1)has more (2)than ten years old and (3)cannot read and write , that person is (4)considered illiterate.

plz anyone help me find the error in this sentence.

This is NOT the right way to ask a question on ELL; it's simply a copy-and-paste from a practice exam with no background information, and no source of confusion clearly identified. There is no way to know if the O.P. has wrestled with this problem for 3 days, 3 hours, or 3 seconds.

As for the O.P.'s plea for a "kind soul" to help understand English better, I don't mean to sound callous, but this isn't a matter of kindness, it's a matter of quality. Once anyone can paste a question here and get an answer, there's no impetus to wrestle with the problem, or to expend any effort explaining what how the O.P. tried to solve the problem themselves.

Long-term, this encourages ELL to be used as a crutch, and its regular contributors to be used as a free tutoring service (I'm pretty confident that's why the answer provided has already garnered a delete vote). Shame on the O.P. for trying to invoke sympathy by asking for some "kind" user to invest time answering questions that are not properly asked.

Lastly, I would caution any would-be O.P.: be leery of asking too many questions from the same book over and over and over again. That will wear on the community; it's also why you should put some effort into solving the problem on your own before asking here. ELL is supposed to be a place where people can get help when they are genuinely stumped, not when they initially encounter a problem. Consult dictionaries and Google first, then ask your question here. The result will be a better question – and a warmer welcome.

These are the main issues with answering questions that should be put on hold until they're reworked into a better quality question.

Rewarding behavior leads to more of the same behavior. I have learned as the owner of many rescue animals over the years that the best way to prevent undesired behavior is to only acknowledge desired behavior, and ignore the rest unless it's egregious and needs immediate correction. If the asker gets their answer, what incentive is there for them to improve their question?

Poor quality questions result in poor quality answers. Yes, the correct answer is given, but without understanding why the asker couldn't find an answer that helped them, there can be no elaboration on why the answer is correct. The answer may only apply to that specific question and offer no understanding that can be extrapolated to other questions.

A question popped up that made me think twice about what I said about being able to extrapolate an answer to other questions. Some questions are about specific sentences and can have answers that are more widely applicable than just to the sentence in the question. Others, like "What do “M”, “G” and “B” buttons mean in an elevator?", have an answer that only applies to that one question, but the question itself is something that more than one person might want answered.

I think that there are high and poor quality examples of both types of questions and answers, so I wanted to clarify that an answer doesn't necessarily have to apply to more than the question at hand to be high quality in my opinion.

Not the answer you're looking for? Browse other questions tagged .

3
Should we answer questions that break the rules?
104
Please, everyone ... details. Please!
36
So, you found a sentence or phrase... (Why you should cite your source)
14
Stop answering close-worthy questions!
7
Mod Election 2021 Open Discussion
9
Do we focus more on building a database of answers, or helping individual learners?
11
Let's be more careful with closing
3
Request question reopen (and/or explanation for closevotes)
14
Handling scant "What does this mean" questions
5
Answering off-topic questions
See more linked questions

104
Please, everyone ... details. Please!
5
Is this question really "proofreading"?
54
Not so fast! (When should I accept an answer?)
15
"Fixing the grammar should be done in answers not the question"